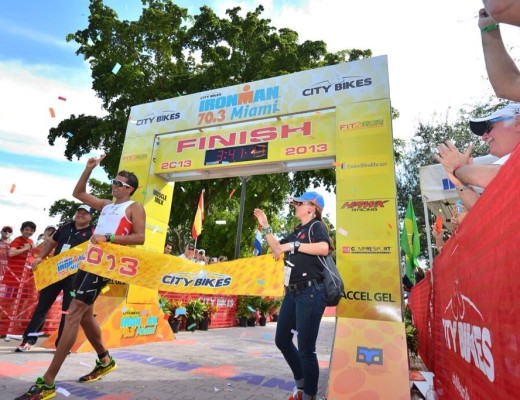 This weekend was the Ironman 70.3 Miami and also my last event in the US for my 2013 season. I was coming into the race as defending champion and the tough pro field really made me dig deep to defend my title.

I love racing in Florida, and Miami brings a whole new element to the table with its amazing food and large cultural diversity. The South Americans would have to be some of the most passionate triathletes and supporters in the world and they helped make this weekend extra special.

So here’s a brief summary of how it went down. I started the swim on the wrong side of the group which left me playing catch up for a good portion of it, the pace was hot for the first half then settled right down and a larger than normal group formed.

Taking off onto the bike there must have been close to 30 guys who made up our group, which was fine, but the sad thing was that the space between cyclists (the draft zone) I felt was not being enforced strictly enough which caused the group not to separate with a pace that would usually spread the field thin. Ben Collins finally got a little gap on the way out to the turn around which he quickly grew to a 90second lead. On the way back it was time to drop the hammer so I made my move, but unfortunately with the large group behind me I really struggled to get any distance from the group. It wasn’t until we hit an aide station half way home when a gap formed and we started to cause some damage. Nils Frommhold anticipated my tactics and worked with me to grow our lead from the chase group and limit the deficit to Collins up ahead. Hats off to Collins for a gutsy move on the bike that paid off as he came off the bike 40seconds ahead.

I was surprised how good my legs felt heading out onto the run but I knew there were several fast runners in that chase group who would be gunning for the number one spot. I caught Collins at mile 1 and was now leading the race. At the 1st turn I saw Osplay running lightning fast and Frommhold not far behind. At the end of lap 1 I had only a 20second gap and was doing everything I could to hold onto that lead as long as possible. Thankfully it was enough and at the turn with 3 miles left to race my gap had grown to 90seconds.

I am looking forward to getting back to NZ, it has been a long time on the road and I cannot wait to sleep in my own bed, even if only for a few days. Next stop is the Australian 70.3 championships in western Australia in 2 weeks time, then back to Melbourne for the Shepperton 70.3 to wind up my season.