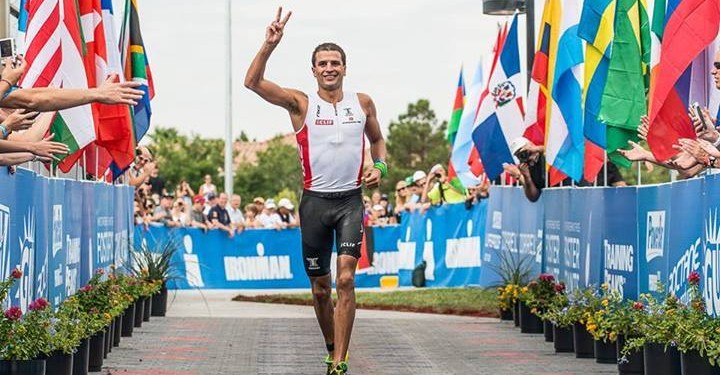 WooHoo, it is great to be back!

I am over the moon with my silver place finish here at the Ironman 70.3 World Championships here in Las Vegas. It has been a tough couple of years but the learning I have had to persevere through has been extremely beneficial. I am very thankful for everyone who has supported and believed in me to get back here, having you all in my corner has given me a great deal of strength and motivation.

It definitely felt weird being in Vegas for a race instead of the usual party scene, I can only imagine how tough it is for the boxers who actually have to perform on centre stage on the stripe, we at least had all our race activities slightly out of town.

To kick things off, what felt like a solid swim ended up being a reasonable amount off the pace I was actually swimming. Craig Alexander and Greg Bennet who are both solid swimmers where next to me so I figured we were doing okay. It wasn’t until we exited the water and got the split to the leaders when I figured out we were actually over 1 minute off the front group, which was a big group with a lot of top athletes and could potentially stay away.

I made sure I set a fast tempo at the start of the bike so we were doing everything we could to close the gap. A couple guys came past me about 4km in and there was a fast downhill section, it felt like they were riding with their brakes on and I was a milli second away from bombing down the outside to keep the pressure on. I thank my lucky stars I didn’t do it because with the mud on the corner at the bottom someone would have been picking up the pieces and that would have been my race. Oh and I forgot to mention, it was bucketing with rain, all that heat training up in the Santa Monica mountains and we get rain… THANKS!

There were a couple guys pushing the pace on the front of our chase group and that along with Sebastian Kienle catching us at about mile 20 helped us bridge the gap to the lead group. The race was now together, but not for long, Sebi quickly made his signature breakaway and while we all knew it was coming no one could do anything to stop him from getting away, I think in the back of all our minds we were hoping he wouldn’t have the strength to put together a similar performance to that of last year where I won the race in the same fashion. Aside from that, the bike finished with a large group, with several of the ITU (short course) guys making the move up to 70.3 (Half Ironman) distance the pace was sure to be on for the run. 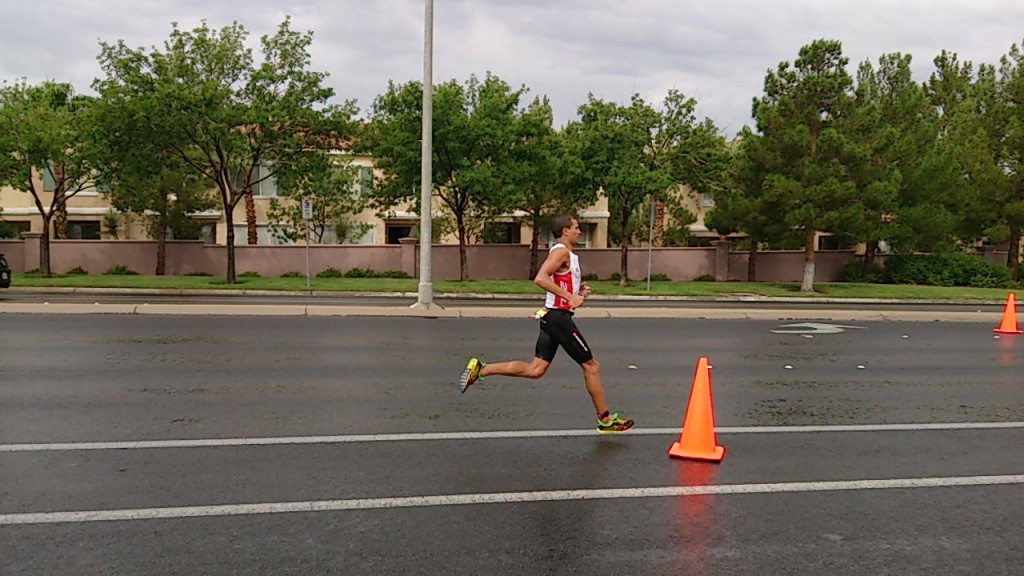 I almost didn’t get my running shoe bag running through transition, but luckily that only cost me a few seconds. Then it was off onto the half marathon. This was going to be a testing run, with both speed and strength as the course was basically 2mile downhill and 2 miles uphill. Joe Gambles took off and I struggled to get my legs turning fast enough to keep up, we would have run through the 1st km in under 3 minutes, he finally started to slow but just as that happened, Jan Frodeno, another German ITU athlete came bounding past me and I was not about to let him get away that easily. I matched his pace, well at least for a little while. We were about a quarter through the 2mile uphill stretch and I checked in to see where my body was at and decided if I was going to hold it together for the duration I would have to back off slightly. I did this but kept him in contention and by the end of lap 1 of 3 I had caught back up as he was struggling with cramps. It started getting a little tougher not having someone in my sights but I was doing a good job holding it together. Halfway through the run, my legs were really feeling it from the differential of the uphill and downhill running and I was starting to worry maybe I had pushed the gas a little too hard at the beginning. I hung tough but unfortunately, the 1 minute I had pulled out of Sebi on lap 1 didn’t keep going down each lap.

Crossing the line in 2nd place to good friend Sebastian Kienle was okay for me today. He deserved the win with how he raced and sharing the podium with another friend, Joe Gambles made for a good day for us all. A big thanks to everyone for all the support and encouragement.