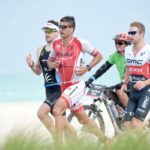 The 2016 season is well underway with me finishing my 3rd race of the year at the “One and Only” Wildflower Half. The first couple races of the year while they have not gone my way they have been good building blocks for what I hope will be a good year.
My season kicked off with the Dubai 70.3, after winning the race last year and being inline for the Nasser bin Hamad Triple Crown $1 million bonus I was ready. With a last minute swim course change I was the only male pro to do the correct course and came out of the water 5minutes behind the leaders which included Jan Frodeno. I was hopeful that the referees would do something at the finish line to correct the wrong but unfortunately it was not to be. With my splits I would have finished comfortably in 2nd place but I had to settle for 4th across the line.

Then leading into my big race for the New Zealand summer – Nutri-Grain Ironman New Zealand, my preparation had gone perfectly and mentally I
was looking forward to progressing my Ironman career, that was until 3 days before the big race a Pukeko (native NZ bird) ran in front of me, I was unable to get out of the way and ended up hitting the bird then hitting the deck pretty hard. The bird ended up as road kill and my ribs ended up badly bruised. It hurt to do anything and the day before the race I didn’t know how I would get through the swim, let alone the whole Iron
man. Luckily my team had an idea to put a local anesthetic to numb the pain in my chest, something they commonly do with rugby players. This took the edge off the pain but I was still unable to get through the swim breathing to my left like I have always done. The bike went well and I got off and started the marathon with good legs. Things were comfortable until the 18km (12mile) mark where I instantaneously felt the anesthetic wear off and was in a lot of pain for the remainder of the marathon. Cam Brown at 43 years
old showed he is not slowing down at all and won the race in record-breaking time.

That brings us to the here and now. The prestigious Wildflower Half Ironman a race I still hold the record for after setting it in 2006. This race has to be one of the toughest out there and with the low water levels in the lake the format had changed to a 1.2mile swim, 2.2mile run, 56mile bike and 10.9mile run. Let me tell you, a hard 2 mile run before starting a bike TT takes a little something out of the legs! 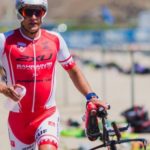 Jesse Thomas who would go on to win this race for the 6th consecutive year was right on my feet coming out of the swim, usually I have a couple minute buffer over him which would have been nice. We got away on the bike and he made his move up “Nasty Grade” I kept him within reach and found the strength in my
legs holding well where I would usually start to fade. Off onto the run I was 1 minute down and while my form felt good and I held a good pace throughout my top end was
not there. 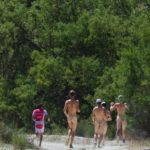 I am happy with where things are at leading into Ironman Texas in a couple weeks. Strength and fitness are good, the body should take a nice jump up after Wildflower so all I need to do now is look after the body and make sure I recover well … and don’t hit any birds or lowflying objects. 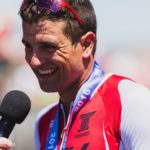