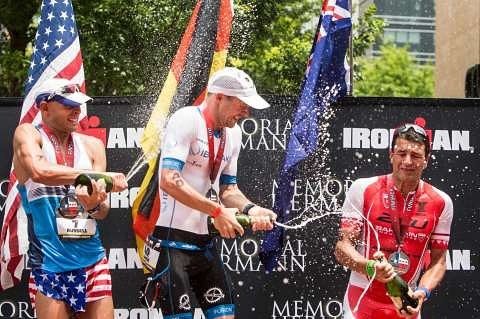 It was great for me to get another Ironman race done at Ironman Texas this past weekend. After crashing my bike in the final days before Kellogg’s Nutri-Grain Ironman New Zealand in March and badly bruising my rib cartilage, I not only needed points to secure my slot at the world championships but I wanted to race an Ironman where I was in control of the outcome.

Recovery after the Wildflower Half went smoothly but I probably could have got a few more massages on the legs as my muscles never really felt soft and fresh. Landing in Texas a couple days before the race may have been leaving things a little late but this allowed to be approach the race more relaxed and focused on myself. Fortunately Aqua Sphere was on sight. With it being early in the season I totally forgot my swim skin (what we use when water temperatures are too warm to allow the use of wetsuits).

Kelly had flown up from NZ with our little guy and with him being his father’s son, he has way to much energy and curiosity and only let mum sleep about an hour on the 14hr plane trip. Then he decided it would be a great idea to party through every night from 11pm to 2am. I definitely married a keeper cause as soon as he started squirming Kelly took him to out the room to let dad get some sleep… don’t worry I am making up for it now!!!

The race kicked off and I managed to settle in the front group. The humidity in Texas was something my body was not used to and I started paying for this right from the start with a labored breathing and not the ease of movement I would have liked. Still I managed to get out of the swim with the group and find my rhythm quickly on the bike. The aim was to have patience and be strong in the later parts of the race, which I think I did a good job of staying true to. With the change of course due to the flooding in the region there were some 90 turns and the distance had been shortened to 150km. At about half way on the bike, the front group unfortunately didn’t receive their special needs bag which included most of my calories and caffeine for the 2nd half of the bike – 6 x Clif Shots and my hydration – 3 x bottles of SOS electrolyte drink I had to problem solve on the go. Leaving things to chance on the course is definitely something one should avoid in an Ironman race in these hot conditions…
Soon the bike was over and it was off onto the marathon. Starky (the uber biker) had a 13minute lead and I was 2nd out of transition. Soon Ironman rookie Patrick Lange who would go on to have an outstanding race and hold on for the win came past. I knew the pace I was at was maintainable. I was ticking along at 3:50/3:55min/km which if I could hold on would give me a 2hr45minute marathon. Starky started cramping at the end of lap 1 and his 13minute lead was now irrelevant. Matt Russell who changed into running gear in T2 had bridged the gap. I ran with him for a couple miles before deciding to back off and save my legs for the 3rd and final lap. He ended up sitting 30seconds up the road for about 8miles but now on the final lap is where guys make or break their race.

My pace had definitely slowed and the hurt was on but I kept moving forward well. With 5 miles to go I was passed by Hanson and had to drop into 4th place but there was no way I was going to give up. I kept him in my sights and tried to keep my technique together. About 2 miles later I was closing back and before I knew it I was back in 3rd trying my hardest to glide to the finish. I was pleased with how I held it together and have walked away with a 3rd place at the North American Ironman Championships and have taken a big step in my progression as an ironman athlete. I can’t wait until Kona to test myself again.

Kelly, Cavallo and I are now up in Girona, Spain for the next 5 weeks for a small training camp in the lead up to a few mid season 70.3’s before getting ready for the World Championships season. Can definitely get used to the siestas and fiestas!!!