This weekends 70.3 race up in Lake Stevens, Washington was a great success for me. After a pretty tough mid season I feel I have managed to regroup and gain control again. I am hoping that my form will keep building through the rest of the season and the best is yet to come.

After a good 3 weeks of hard training in Kona I was hoping I would be recovered enough to give my body a little push this weekend. It seems the timing was just right as my training buddies in Kona – Arturo Morales, Timmy Marr and his wife all had good races over in Oahu this weekend as well. 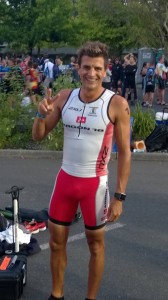 Clayton Fettell took an early lead in the swim and built himself a 30second buffer getting onto the bike. I found myself in somewhat of an unusual position leading the chase group trying to limit that deficit. After scouting the bike course I knew it would be an exciting ride, especially testing my new Argon 18 E118 Next model for the first time. The course wound along a very rolling hilly course and with the dry roads we were able to push the limits a little. I gave the pace a good push early on and then Ben Hoffman and Matt Reed showed they were in top form keeping the pressure on when the course got really challenging. Including Clayton and Paul Ambrose the 5 of us managed to build a good lead and cement the top 5 placing for the day.

While I was lagging getting into my running shoes Matt was out of there, pretty much a short course transition and a short course start to the run as we went through the 1st kilometre in just over 3 minutes (under 5 minute mile pace). Hoffman and I chased him down and soon the 3 of us settled into a very good pace. At mile 4 we hit the first real climb where Reed paid for the lightning fast start and Hoffman and I opened up a gap.

Hoffman was running very strong and I wondered when my legs would give way. Taking each mile as it came we soon found ourselves with 2 miles to go, first Ben tried to push the pace then I gave it a little go. Going into the last few hundred meters I got myself into the lead and pushed the pace, Ben was right there on my shoulder and there was a minute I thought I had started my kick a little early but then the smell of the finish line took over and I was hungry for my first victory of the season. 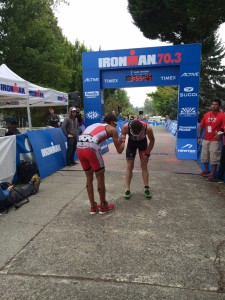 All in all I am happy with where my form is at, this was a good little hit out 3 weeks out from 70.3 world champs. A pretty cruisey week now, Kelly and I will be making the trip up to Clif Bar in San Francisco for a theatre event on Thursday which I am really looking forward to. Ben Hoffman, along with Tim O’Donnell and Linsey Corbin will all be making appearances so hopefully we can entertain!