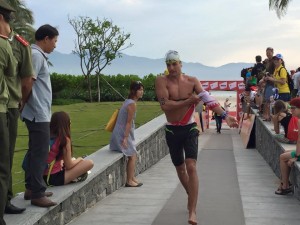 As my month on the road draws to a close I reflect on the amazing places I have visited and competed in and I am really happy with my solid performances – one Victory, one 2nd and two third places and the invaluable amount of learning I can take away from it all. Although there was a substantial amount of travel and racing in this block, I feel I still have a lot in reserve and can walk away into a small break without having to be dragged off the sidelines on my death bed.

Last weekend was the Inaugural Ironman 70.3 Vietnam in Da Nang and part of the reason I made this trip was I had such fond memories of the place as Kelly and I spent a few days of our honeymoon at the resort next door to the race hotel, The Hyatt, on top of this the race owner Fred Uytengsu and his team always do a first class job looking after us Pro’s. Besides the 35’C (real feel – 50’C) it was a very “cool” experience. 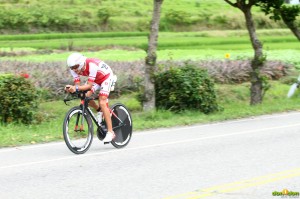 This race was going to be a tough race; fighting not only the stellar field that had turned up but the brutal elements were also going to play a huge part in the outcome of the race. I had a blinder of a swim and made the front pack with some gun swimmers, but unfortunately I had nothing on the bike and run. Heading out on the run felt like we were starting a death march, I was struggling to hold much under 4minutes per kilometer. Tim Reed went out strong but soon James Cunnama came past us both like he wasn’t even feeling the heat. James went on to have a blistering run and Reed and I struggled home in 2nd and 3rd place. 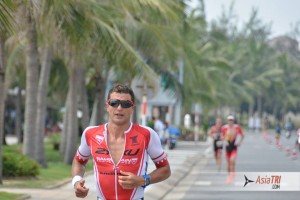 Unfortunately with the load adding up over the weeks and me messing up my training/tapering in the lead up for this 3rd race I either started coming down with something the night before the race or just after because as soon as I got to the airport after deciding I wanted to tackle one more race is the moment I started getting a tickle in my throat. That tickle slowly escalated after arriving in LA and I was having doubts about my fourth and final race. I decided after making the venture out to the US, I would head to Chattanooga and see how things went in the final few days and although there was not much improvement in how I was feeling before the start I surprisingly felt ok out there in the race. This was the inaugural Ironman 70.3 Chattanooga and it was a cool race, river swim, undulating bike and tough/ fast / technical run course. Again I came out of the water with the front bunch of 5, which was a great start, and my legs felt strong heading onto the bike. I knew I wanted to keep the load as low as I could for as long as possible, as any spike in heart rate got me wheezing pretty badly but staying at tempo felt good. By the end of the bike Argon 18 teammate Leon Griffin had bridged across to the front group and seemed strong. The run was sure to be interesting with Andy Potts and Griffo. 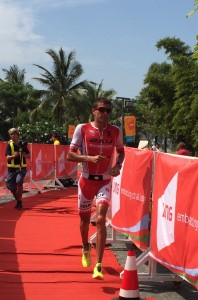 The 1st mile was basically up hill and Griffo was showing his strength, which was impressive after riding solo for the bike. I managed to settle in with the 3 of them fairly comfortably, although I was probably huffing and puffing quite loudly. This is until we got to about mile 9/15km where Potts thought he would test the water, I went with his surge and while I felt confident at the time, a moment later I knew it was the wrong decision. I looked down at my Polar to see my Heart Rate spiking and pretty soon I was paying the price for loosing control. The few seconds I had put on Leon came back quickly and soon I was in 3rd with not much left in the tank. The final stretch home was grueling to say the least but all in all a solid effort especially given where things were at a day ago.

I now start my journey back to NZ for a little down time before I start my build up for the Ironman 70.3 World Champs in Austria at the end of August and prepare for fatherhood…